The red poppy has become a powerful symbol of the tragic loss of life in war. After WW1 it was adopted by The British Legion to help raise money for their charity.

James Cropper PLC of Burneside Mills near Kendal in Cumbria is a world leading company in the manufacture of specialist papers and since 1978 they have held the exclusive contract to make the red and green poppy paper for The British Legion.

They produce 80 tons of the red and green poppy paper every year, which is enough to make 40 million poppies.

Nothing could better illustrate the poignant association of the poppy in life and death in the trenches than Private David Johnston of the Lonsdale Pals. He was a widower with two young children and could have reasonably expected to have been exempt from military service. He heeded the call to arms and tragically was killed in the battle of the Somme in 1916. When his personal effects were returned to the family it contained a SPCK hymn book with a pressed poppy between the pages of the hymn 'O God our help in Ages Past'.

It is impossible for us to know why he picked the poppy and put it in the pages of his hymn book. However, it makes it all the more poignant to see this token of his appreciation of the fragile flowers of Flanders.

Click on the following link to listen to the full interview: http://www.bbc.co.uk/programmes/p02b0lm6 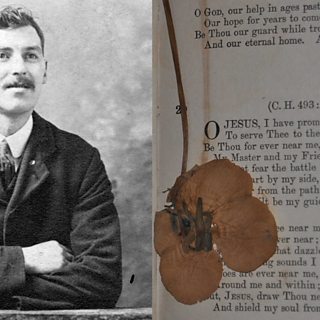 Image: Private David Johnston and the poppy he kept in his hymn book, courtesy of Stuart Eastwood at KORBR Museum