Engineering is dominated by men, with women making up just 12.3 per cent of the industry in the UK, but a multi-national company with a site in Cumbria is heading up the fight to change that.

Global health and hygiene corporation Kimberly-Clark, which specialises in paper-based consumer products, is a leading light for equality in the sector with a growing number of women employed at its site at Barrow which manufactures Andrex and Kleenex products.

Process engineer Lisa Milne, electrical technician Tammie Barrow and mechanical apprentice Stephanie Sleigh have all been at the company for several years and hope to see more women choose engineering as a career.

Mother-of-two Lisa, 34, is originally from Northern Ireland but has been based in Cumbria since studying for a masters in chemical engineering at Queen’s University in Belfast after doing a year in industry at GlaxoSmithKline in Ulverston. 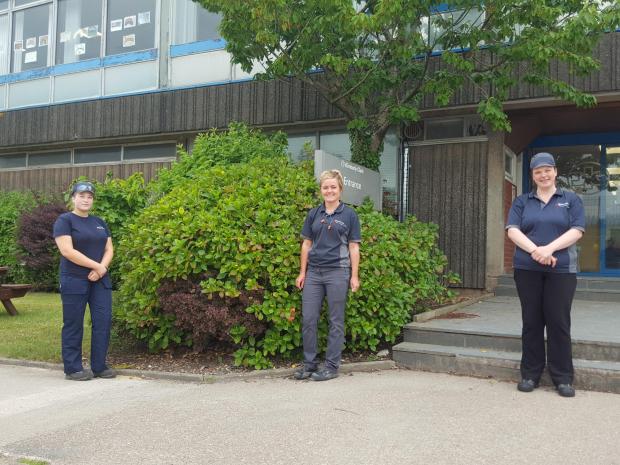 She has eight years’ of experience in tissue manufacturing, pharmaceutical, nuclear and gas industries and initially considered being an engineer after having a passion in maths and science at school.

She said: “It was a bit different going to an all-girls school, engineering wasn’t talked about and I was around 15 when the idea first came into my head through the career support you get at school and a professor from Queen’s came to speak to us.

“I got a bursary and spent a few days in the PhD labs when I was 16 and thought that I wanted to do something a bit different and did some work experience and make sure it was the right move, and that was vital.

“My sandwich year at university was my first time working in the industry, I really enjoyed it and met my husband so after I graduated I applied for a graduate scheme at Sellafield which was mostly engineers, varied people and a lot of women as well.

“I feel that I’ve done a lot in the years since leaving university.”

Lisa worked at the nuclear site on the coast for three years before becoming a contractor at Conoco Phillips’s gas terminal in Barrow for four years until having her first son.

She works on one of the tissue machines and highlighted how supportive Kimberly-Clark has been.

She said: “I got the job at Kimberly-Clark when I was pregnant with my second son, worked for six months and then went on maternity leave.

“I provide technical support doing fault finding, looking for improvements and implementing them, it is a varied job.

“A typical day would mean being involved in the morning meetings, and see if any issues have come up and every day can be completely different.

“How to find improvements and run the machine more efficiently and safely, sometime working with external vendors to design something to go onto the machine.

“It feels like I have done a lot in different industries but its flown by, I love being an engineer and always have done.

“Talking about women in engineering, I haven’t found any issues at all. Some of the situations you have to deal with when having children is the main thing.”

Electrical technician Tammie, 25, has worked at Kimberly-Clark for nine years after joining as an apprenticeship straight from Dowdales School in Dalton-in-Furness.

Last year, she was involved in a project buying different machines from countries across Europe and bringing them together to create a production line to produce the Kleenex Compact box as part of a multi-million-pound investment at the Barrow site.

The experience, which saw her spend time in the Netherlands and Italy, has led to her feeling that the UK is ahead of the curve in having more women in engineering.

She said: “I didn’t really know what I wanted to do when I left school, I don’t think many do know when they are 16. I didn’t want to go to sixth form and liked the idea of earning money while learning so applied for a few apprenticeships and thought if I didn’t enjoy it when I finish after four years I can try something else as I’m young enough.

“But I have loved being at Kimberly-Clark and not even had a second thought about trying something else. It has been really good and its quite interesting.

“My sister went through university and gained a degree however is now paying back a student loan so I think apprenticeships are the way forward.

“I’ve always been a practical person, my dad had a car garage in Askam so I grew up messing around with things. I didn’t enjoy being in a classroom just sitting there but when you can apply something and be more hands-on that fits me a bit more.

“I have always felt comfortable being a woman in engineering, a friend of mine started a year before and gave me some insight. I never had any reservations and it was only once I started work that I realised there was a thing for women in engineering as to me its so normal.”

Tammie said that around 90 per cent of people she works with are male but there was an element of surprise by people on the continent at dealing with a female engineer when spending time working abroad last year.

She added: “Last year was a brilliant experience for me, I got selected as part of a team to install a new machine at the papermill to make Kleenex Compact Tissue. There was a lot of travelling to Italy and Holland and there were only two females on the project.

“It was a lot of travelling but it was interesting going to the other companies in Italy, there are hardly any women on the shop floor at all and they do a double take when they see you. They were good about it but did say it seemed strange seeing a woman on a project and asked why we were engineers, there was an interest in why we’d chosen this career path. In the UK it doesn’t seem to be a thing anymore and we are ahead of the game compared to what I’ve seen in abroad.”

Tammie has also spent time going to local schools, speaking to students and helping to promote engineering for woman and she feels it isn’t given as much focus as other options to young people such as university.

She said: “To promote more women, we need to get into schools and encourage people to go down the apprentice route. I’ve attended career evenings and talks but it doesn’t seem to be pushed as an option when they leave school.

“Teachers focus on sixth form and university so apprenticeships don’t get as much press as they should. If we can speak to them in year 11 it will stick with them then and that is the way forward.”

Stephanie is in the third year of a mechanical engineering apprenticeship and is hoping to secure a full-time permanent position at Kimberly-Clark upon its completion.

At the moment she balances real-life experience with spending one day a week at college and despite being the only girl on her course the 21-year-old from Millom is really enjoying the experience.

She said: “Growing up I enjoyed doing projects with my dad and my granddad.

“My product design teacher at school really opened it up for me in what I wanted to do after sixth form as I’ve always enjoyed the more practical side of learning.

“I’m part of the central team at the moment so we walk alongside the other technicians and we get a range of different jobs every day.

“It is really interesting and getting this opportunity has helped me build my knowledge as an apprentice.

“At the moment I’m working towards my end point assessment in my apprenticeship and I have found it really inspiring to see other technicians who have come out of the apprenticeship scheme successfully like Tammie.

“I want to progress to their level.

“My three years have flown by so far, for the first I was based in the skills centre just learning the different machinery you can use.

“For the second I was based out in the mill with a technician just building my knowledge and have got really good experience working throughout learning and getting different job roles.”

Stephanie added that she has found it interesting going to school events with work and talking to pupils about engineering.

She added: “My sister is just finishing her GCSEs and her and her friends have asked me about being a woman in engineering and what it is like and I feel really pleased and empowered to help give advice.”