Having already been judged Engineering Apprentice of the Year at the regional heats in Wales, he went on to achieve national recognition in the finals of the Make UK Manufacturing Awards 2019.

Accompanied by girlfriend Georgia and colleagues from the mill, Jack was honoured at a glittering awards dinner in the East Wintergarden at London’s Canary Wharf.

Organised by the manufacturers organisation Make UK – previously known as the Engineering Employers Federation – the awards are designed to recognise manufacturing excellence.

From best-in-class manufacturers to rising-star apprentices, the Make UK dinner with 260 attendees celebrated them all – with compere Jason Bradbury of TV’s The Gadget Show arriving on one of his own inventions, a jet-powered hover board no less.

It was Jack’s humility and dedication to the job that most impressed the judges, with his citation reading: “His strength is a great attention to detail, and he produces work of a high standard – regularly going above and beyond. Although very humble, Jack is a worthy recipient of the award.”

Oakenholt Operations Manager Lee Jones, who joined Jack at the awards event, said afterwards: “All of us at the mill are just so proud of Jack’s achievements. He’s a shining example of the sort of talent we look to recruit, train and employ right across the company.

“These bright youngsters are the lifeblood of our business going forward, and success stories like Jack – along with our sister mill in Prudhoe recently winning a Princess Royal Training Award for its apprentice scheme – are a perfect illustration of why school-leavers should look to Essity for a world-class career that is second to none.” 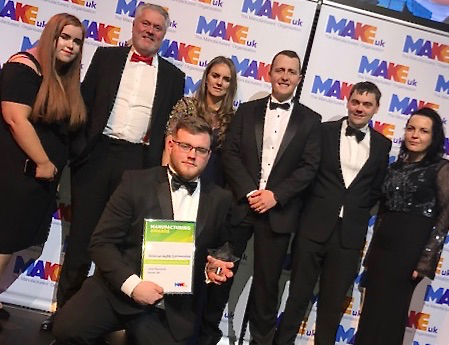