A roll of World War Two Nazi-themed toilet paper has sold for £160 at auction. Each sheet of the single-ply roll is imprinted with an image of a Nazi caricature, including Hitler.

The roll, which pokes fun at the Third Reich and is thought to have been produced in the late 1930s, was discovered in a barn in Herefordshire.Each of its 20 sheets is imprinted with an image of a Nazi caricature, including Hitler and the caption: "Now I'm brownshirt all over." 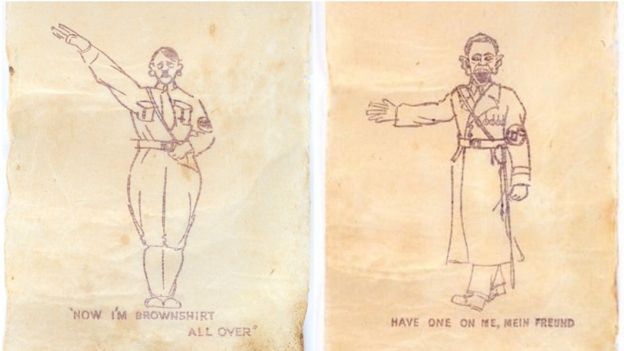 Other captions on the single-ply roll include: "'We want closer relations with Britain.' Don't worry you're just about to get them."

Mr Jenner-Fust, of Chorley's Auctioneers in Gloucestershire, said: "It's rather thin war-issue paper and wouldn't stand up to much."

He added: "It came from a house in Herefordshire but unfortunately the family had no idea where it came from. It's not complete, there are about 20 sheets and the end sheet has a tear mark across it."

Despite being a "very niche thing" he said the lot had attracted interest from all over the world. "It sold for £160 but with the buyers premium that's about £198 - so about £10 per sheet," he said. "That has to be a world record for toilet paper. You could say we were flushed with success."