Craft skills under threat - including hand papermaking and mould making

New research by the Heritage Crafts Association has unearthed dozens more traditional craft skills on the verge of extinction in the UK, in the first major update of its pioneering project, the Red List of Endangered Crafts.

Sixteen new crafts have been added to the ‘critically endangered’ category of the Red List, meaning that they are at serious risk of dying out in the next generation, including withy crab pot making, millwrighting and commercial handmade paper making. They join 20 other critically endangered crafts, including five (bell founding, flute making, scissor making, tinsmithing and watch making) that have been reclassified as being at a higher level of risk than when the research was first published in 2017.

Critically endangered crafts include those with very few practitioners, few (if any) trainees and a lack of viable training routes by which the skills can be passed on. Often they serve very niche markets, and craftspeople cannot afford to step away from production to train their successors for fear those markets will disappear.

It’s not all bad news, however, as the craft of sieve and riddle making, which was listed as extinct in 2017, has now been revived by two new makers devoted to bringing it back, both of whom are now beginning commercial production. In addition, the organisation behind the research, the Heritage Crafts Association, has, with funding from The Dulverton Trust, employed an Endangered Crafts Officer to look for practical ways to safeguard these crafts skills, and has set up an Endangered Crafts Fund to provide the means to do so.

Daniel Carpenter, who led the research on behalf of the Heritage Crafts Association, said:
“The Red List of Endangered Crafts is vital in drawing our attention to parts of our shared cultural heritage we are at greatest risk of losing. What we as a society decide to do with that knowledge is up to us, but at the Heritage Crafts Association we believe that the country’s skills and practices can be just as valuable as its historic artefacts and monuments… perhaps even more so as they may offer opportunities for future generations to create their own sustainable and fulfilling livelihoods in ways we cannot yet imagine. If we allow these crafts to disappear then we seriously diminish these opportunities.”

Whilst the UK has been a world-leader in the preservation of tangible heritage (museum collections, buildings and monuments), it has fallen behind the rest of the world when it comes to the safeguarding of intangible heritage (knowledge, skills and practices). It is among only 15 of 193 UNESCO members that has not yet ratified the 2003 Convention on the Safeguarding of Intangible Heritage, and government responsibility for heritage crafts falls in the gap between agencies set up to support arts and heritage.

Julie Crawshaw, Director of the Heritage Crafts Association, said:
“In an age of hyper-digitisation these skills can offer a viable alternative workplace and a lifestyle that can bring a sense of accomplishment and increased wellbeing. As examples of tacit knowledge that cannot easily be passed on in written form; they survive only through practice and the transmission of skill from one person to another. The Heritage Crafts Association, which is celebrating its tenth year in 2019, is dedicated to safeguarding heritage crafts skills for the benefit of everyone.”

All 212 entries featured in the Red List of Endangered Crafts 2019 edition are available to view online at http://redlist.heritagecrafts.org.uk. 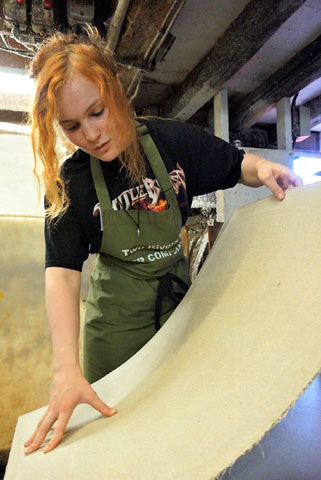 About the HCA Red List of Endangered Crafts
The 2019 edition of the HCA Red List of Endangered Crafts was led by Daniel Carpenter, on secondment from his doctoral research on craft heritage at the University of Exeter, and supported by the South, West and Wales Doctoral Training Partnership. The project runs alongside the work of the Heritage Crafts Association’s Endangered Crafts Officer Mary Lewis, whose post, funded by The Dulverton Trust, has been created to identify and develop interventions to improve the prospects of such crafts.

For the 2019 edition, 212 crafts have been assessed to identify those which are at greatest risk of disappearing. Of the 212 crafts featured in the research, four have been classified as extinct, 36 as critically endangered, 70 as endangered and 102 as currently viable.

Drawing on information such as the current number of craftspeople and trainees, the average age of practitioners, opportunities to learn, and other issues affecting the future of the crafts considered, the research assesses how likely it is that the craft skills will be passed on to the next generation. From armour making and arrowsmithing to wig making and woodturning, each has been assigned to one of four categories: extinct, critically endangered, endangered or currently viable.

Four crafts are known to have become extinct in the UK in the last ten years (cricket ball making, gold beating, lacrosse stick making, and paper mould and deckle making) with one more (sieve and riddle making) brought back from extinction. At the other end of the spectrum, viable crafts are defined as those for which there are sufficient craftspeople to pass on the craft skills to the next generation, though crafts in the currently viable category face real challenges and require continued monitoring.

For the purposes of this research, a heritage craft is defined as “a practice which employs manual dexterity and skill and an understanding of traditional materials, design and techniques, and which has been practised for two or more successive generations.” The research focuses on craft practices which are taking place in the UK today, including crafts which have originated elsewhere.

The 2017 Red List of Endangered Crafts, funded by The Radcliffe Trust and led by Greta Bertram, was the first to rank traditional crafts by the likelihood they would survive the next generation. It brought the plight of these skills to national attention, with coverage across national newspapers and broadcast media including Countryfile, The One Show and Radio 4 Woman’s Hour.
http://redlist.heritagecrafts.org.uk

About the Endangered Crafts Fund
The Heritage Crafts Association’s Endangered Crafts Fund has been set up to ensure that the most at-risk heritage crafts within the UK are given the support they need to thrive. The Fund will be used to support makers and trainees who wish to develop or share their skills in the crafts that have been identified as being most at risk.

About the Heritage Crafts Association
Founded in 2009 by a small group of makers and those interested in craft, the Heritage Crafts Association (HCA) is an independent charity advocating on behalf of traditional heritage crafts. Working in partnership with government and key agencies, it provides a focus for craftspeople, groups, societies and guilds, as well as individuals who care about the loss of traditional crafts skills, and works towards a healthy and sustainable framework for the future. It aims to support and promote heritage crafts as a fundamental part of our living heritage.

About The Dulverton Trust
The Dulverton Trust is an independent grant-making charity. It supports UK charities and CIOs (charitable incorporated organisations) tackling a range of social issues, protecting the natural world, and preserving heritage crafts.
www.dulverton.org