A number of global companies have replaced or are doing trials to replace the material in their gift cards – from plastic to paperboard. Sweden’s largest cinema chain, SF Bio, has taken the plunge and is now replacing all its cards.

“When our card supplier, Megacard, suggested we could make our gift cards from paperboard and thereby drastically reduce their environmental impact, it was self-evident to us to switch,” explains Anna Marcusson, product manager for gift cards at SF Bio.
“In plain language, it means we’re phasing out the use of 10 tonnes of PVC a year by phasing out the plastic and replacing it with cards made of Invercote from Iggesund Paperboard,” she continues. 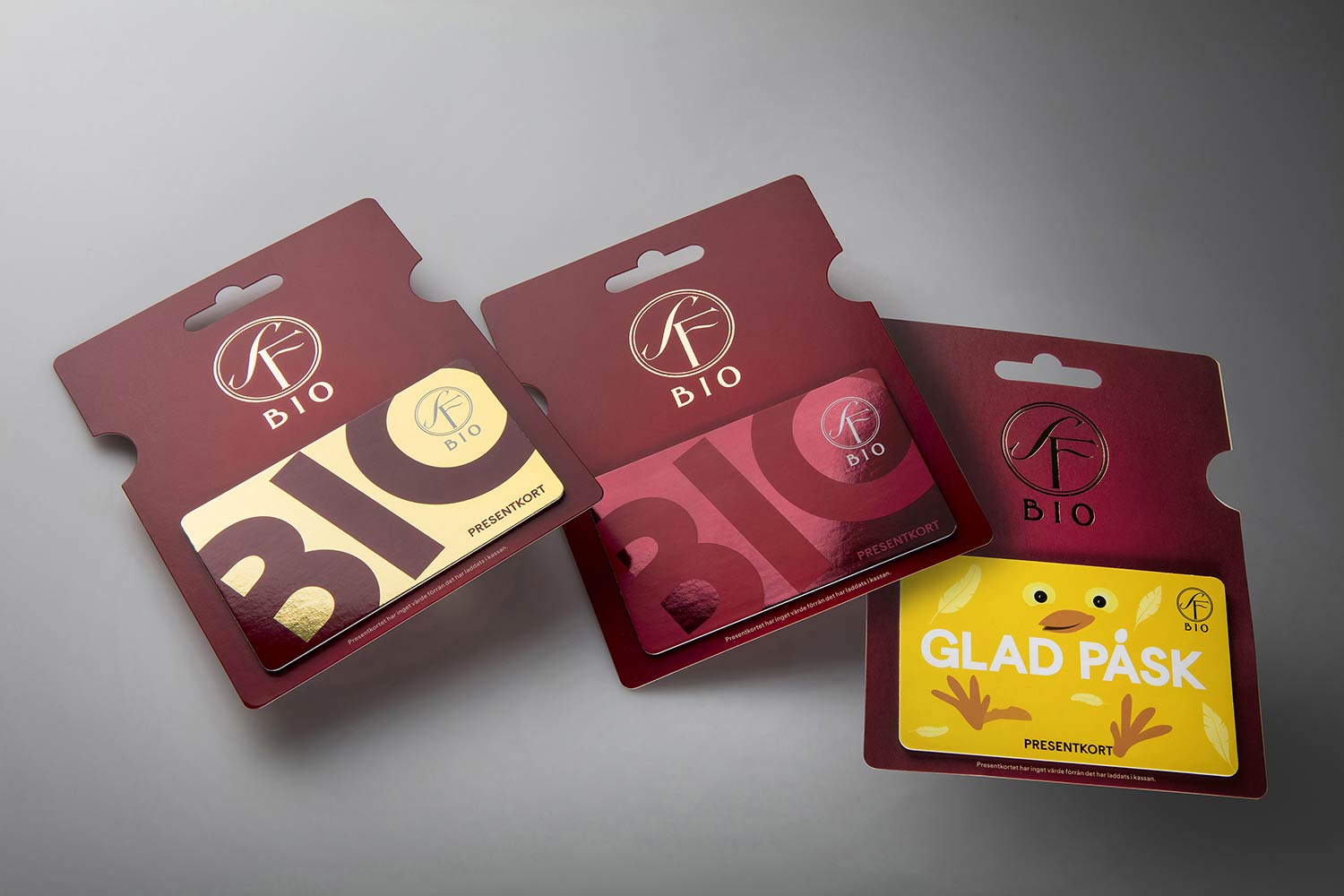 “When we could have just as impactful cards in paperboard as in plastic we didn’t hesitate to switch – for the environment’s sake,” says Anna Marcusson, product manager for gift cards at SF Bio.

Replacing plastic with a non-fossil material is a clear trend, not least in the packaging industry. Switching from fossil plastic to an alternative material such as paperboard reduces companies’ climate impact. Changing an established infrastructure takes time, though, especially if it means that the packaging must be redesigned, the packing equipment modified or replaced, and the distribution from manufacturer to consumer is affected. The UK food company Iceland has attracted widespread attention with its pledges to eliminate plastic in its packaging within five years. Many people with packaging experience say five years is a fairly short time given the challenges faced by Iceland.

In light of these factors, the switchovers by IKEA and SF Bio have occurred very quickly, and there is reason to believe that many more companies will follow their example.

“Because the cards’ format is identical, it’s easy to make the switch. Apart from the actual production process for making the cards, very few other components of companies’ existing equipment need to be modified. So this is a very simple step to take compared with redesigning a plastic packaging solution, where complex and fully automated packing lines must be modified,” explains Johan Granås, Head of Sustainability at Iggesund Paperboard, who was closely involved in developing the solution that IKEA finally chose.

Another example of this packaging industry trend is Apple, where packaging developers are focusing on reducing the use of plastic. This is clear from Apple’s Paper and Packaging Strategy, which the company published in October 2017. Among other things, the report details how Apple succeeded in reducing the plastic content of the iPhone 7 packaging by 84 per cent compared with that of the iPhone 6s.

Apple’s smart speaker, HomePod, launched at the beginning of 2018, is a clear example of this approach. An incredibly complex paperboard construction with closures holds the speaker cord in place and there is also a setup to secure the plug.

“Ten years ago, any manufacturer would have solved this issue with plastic,” Granås says. “But now we’re seeing time and again how companies are investing strongly to create alternative solutions in paperboard – not only Apple but many, many others.”

Granås is careful to say that plastic is still an important material in both today’s and tomorrow’s packaging market. Traditional paperboard packaging for food often needs a plastic barrier to create a seal that protects against grease, moisture and aromas. Making the packaging’s construction out of paperboard and then creating the barrier with the thinnest possible plastic coating is already a good example of good materials management.

“The development of fossil-free plastic materials is happening very quickly and I predict we will soon have bioplastics with less and less fossil content, which will significantly reduce the climate impact of food packaging in particular,” Granås concludes.